I’m less keen on…  Nothing really, though some would prefer the addition of other instruments and/or the inclusion of other genres

I first came across El McMeen through guitar tutorial material produced by Stefan Grossman. Many of the tunes on this album are featured on an El McMeen guitar instructional DVD.

I like…  The impassioned singing, the energy and variations of the guitar playing

I’m less keen on…  Nothing – this is authentic blues – allowance needs to be made for the lack of polish!

I first encountered Rev Gary Davis’ name in guitar tuition books in the early 1980s. I bought a vinyl album containing some of his 1960s recordings (some of which feature on this CD) and, although I wasn’t keen on some of them, others blew me away. I have a number of CDs of his recordings from this period, but I think that this one makes an excellent starting point for his music, especially given the album’s price.

Although blind from early childhood, by the age of eight or nine, Rev Davis had learned to play guitar, banjo and harmonica. He played and sang on sidewalks to make a living, and mentored Blind Boy Fuller, even claiming that Fuller owed him everything he knew, which seems a little exaggerated. He also made some recordings in the 1930s, but remained aggrieved for the rest of his days about the lack of remuneration he received. This affected his attitude to making recordings in later life. He died in 1972.

As with a number of other black bluesmen who had recorded in the 1920s and 1930s he was rediscovered in the American folk revival of the 1960s.

END_OF_DOCUMENT_TOKEN_TO_BE_REPLACED

I’m less keen on… Nothing really

I first came across Kate Rusby in a guitar magazine. A few months later she was scheduled to perform a gig nearby. I booked a ticket and decided to sample some of her music beforehand. I settled for this, her first album.

Kate Rusby comes from Barnsley, Yorkshire. Prior to her solo work she had worked with Celtic girl band END_OF_DOCUMENT_TOKEN_TO_BE_REPLACED

I like…  The variety of genres, the evocative and deft guitar playing

I’m less keen on… Nothing really, although ideally I’d have liked the inclusion of some of John’s interaction with the audience

I first came upon the late John Renbourn’s music through references in guitar tuition material. Not long after, I obtained a vinyl copy of “John Renbourn”.  Years later I added a CD or two to my collection, then, after hearing him live twice with harpist/multi-instrumentalist Robin Williamson, added a few more. I count myself honoured to have had my copy of this album autographed – complete with a pentangle symbol – by John at one of those gigs, where I bought it.

END_OF_DOCUMENT_TOKEN_TO_BE_REPLACED 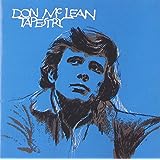 I like…  Don’s voice, the thought-provoking lyrics, the range of tunes, arrangements and sounds

I’m less keen on…  Nothing really, though as with any album I like some tracks more than others

In 1971 suddenly, and seemingly out of nowhere, an American singer-songwriter captivated many listeners with an epic but enigmatic song, “American Pie”, and the following year with “Vincent”. Much as I was tempted at the time to buy the “American Pie” album, I opted instead to buy Don’s debut album, “Tapestry”. Although the album, and its title track, shared the same name as Carole King’s better known “Tapestry”, END_OF_DOCUMENT_TOKEN_TO_BE_REPLACED

I like…  The variety of genres, the upbeat feel, the rich tone

I’m less keen on…   Some of the tracks are very short, but then the album is really aimed at guitar players wanting to learn new tunes and arrangements

Not only did the “folk revival” in America in the 1960s see the rediscovery of some great performers from, several decades earlier, it also saw a new generation of would-be guitar players. Many set themselves to learning the styles of the likes of Mississippi John Hurt, Reverend Gary Davis and Son House.  Some tracked down the music of other players, long dead, from the 1920s and 1930s. Blues and ragtime guitar challenged their dedication and co-ordination.

A number of players married the fingerpicking styles of some of the greats to compositions of their own, or to a range of tunes from folk or pop traditions. This album is a case in point. END_OF_DOCUMENT_TOKEN_TO_BE_REPLACED

I like:  Fay’s voice, the arrangements, 3 especially strong songs including one that blows me away each time

I’m less keen on:  a few of the less melodic songs – personal taste only, however!

“The Hurricane Party” isn’t what you would expect for the name of the band that backs a singer who performs traditional “folk” music. END_OF_DOCUMENT_TOKEN_TO_BE_REPLACED

I like…  The warm, gentle singing and nimble guitar playing, the upbeat feel

Not all acoustic blues will appeal to a newcomer to the genre. I feel that Mississippi John Hurt is a great starting place.

Firstly not all his music was, strictly blues, but came from a wider range of material. Many of the songs he recorded are upbeat and melodic rather then melancholic and strident. Secondly, as the great Doc Watson and Stefan Grossman described them, even Mississippi John’s blues had a happy feel to them!

He recorded a few songs in 1928 and was rediscovered in the 1960s American folk revival, where he endeared himself to a new generation of fans, many of whom learned to play and sing some of his songs.

I love Mississippi John’s guitar playing. It’s tuneful, often mirroring the melody line, and generally gentle and nimble. He plays a steady, alternating bass and weaves the melody over it, with some nice syncopation and bass runs. I play a number of his songs on guitar myself.

I’ve already given away part of the game. John passed into obscurity END_OF_DOCUMENT_TOKEN_TO_BE_REPLACED

I like: The variety of sounds and moods, Alison’s voice as well as the harp, the arrangements

I love the sound of a harp. It’s relaxing and somehow soulful, and when it’s Celtic harp playing folk melodies (traditional or contemporary) I think it’s almost magical.

I’d never heard of this player or album until they were brought to my attention by a fellow member of a review site. I took a punt, ordered two titles, and eagerly awaited their arrival!

Alison Eve has studied and taught singing. From her childhood she played piano, guitar and trumpet.

From around 1999 she decided to teach herself harp, and her website names Loreena McKennit and Clannad as strong influences.

Besides singing and recording in her own right, she seems to have quite a diverse range of styles. As well as singing in a folk vocal group “Messenger” and a female choir “nChant” she has also sung with a folk-rock “Eve And The Garden”, and even a heavy metal band “Ascentis”!

She plays at an increasing number of weddings.

Unlike classical harp with its various pedals, Celtic harps have levers. They come in various sizes and with various numbers of strings, but essentially they have a wide pitch, giving the unique sound, the higher pitched strings creating an ethereal tinkling in contrast with the lower pitched ones. Alison Eve’s website describes three instruments that she has: a small harp with 25 strings, her main one, a maple large lever folk harp, and also an electric instrument harp made from carbon fibre. The photograph below from her website (used with kind permission) shows her with the second of these instruments, performing at a wedding.

In Ireland the harp has had a very chequered history; it was such a part of Irish culture that it came to be seen as a symbol of resistance to English rule and was banned for many years. It’s hardly surprising that for many years the harp did indeed serve as a symbol of Irish identity, and graced the back of coins from Eire for many years! END_OF_DOCUMENT_TOKEN_TO_BE_REPLACED

I like…  The sponataneity, the vibrancy, slightly exotic feel, variations and improvisations

I’m less keen on…   The lack of polish won’t appeal to some (but doesn’t put me off – it’s simply the trade-off for spontaneity). The vocals need to be accepted rather than enjoyed.

The revival of interest in “folk” music in the 1950s – which embraced several acoustic genres – led to a search for some former great players and singers from the 1920s and 1930s, and also to widespread travel to capture “field recordings” in obscure places by local people who sang or played on a purely amateur basis.

The hope of those who undertook such journeys was, of course, to make a great discovery. Obviously, the search for great music from people hitherto unheard of was far more fickle. Huge amounts of music were captured, much of it interesting. Little of it was great, however. END_OF_DOCUMENT_TOKEN_TO_BE_REPLACED

mostlyacousticsteve
Create a free website or blog at WordPress.com.